Would you enthusiastically rehire everybody on your team?

“Xavier, I will be leaving the company by the end of next month.” With these words the best member of my team told me many years ago that she was leaving.   She was extremely talented, had great potential, and was a cornerstone of my succession plan.  “But why?” I pleaded.

“I love my job and the people here – but it isn’t fair that I work hard every day and you have an individual; you know who she is, who is a drag on your whole system.  She shows up late, leaves early, to say nothing about the quality of her work.  Look at all of the time you have to spend with her. This is not working anymore.  I don’t think that this is the right place for me to grow and develop myself.”

Like a slap in the face, I learned the concept of the “C-player trap”: The #1 reason your best employees leave your company is your tolerance of C-players – i.e. low-performing employees who don’t live by your company values. Most managers in companies spend more one-on-one time with C-players than with their best employees – often due to disciplinary reasons or requirements to address C-player performance.

The best time to let someone go is the first time you think about it.  You have to let C-players go, period. Yet most executives hate letting them go: you avoid conflict, you don’t want to hurt their feelings, they are a nice person, I can coach them to performance, I don’t have the time right now to find and train a replacement, it’s better to deal with the devil I know and most often, I don’t want to admit I made a mistake.

The reality is: C-players hurt employees around them – and you damage your credibility when you tolerate C-players’ bad behavior. C-Players not only perform poorly, they also drag down the performance of everyone around them.  Stanford professor Bob Sutton in his book “Good Boss, Bad Boss” estimates that teams with just one deadbeat or downer, “suffer a performance disadvantage of 30 to 40% compared to teams that have no bad apples.” Sutton goes on: “Bad is stronger than good. The impact of negative interactions with bosses and coworkers on employees’ feelings are five times stronger than positive interactions. Negative interactions (and the bad apples who provoke them) pack such a wallop in close relationships because they are so distracting, emotionally draining, and deflating. When a group does interdependent work, rotten apples drag down and infect everyone else. Unfortunately, grumpiness, nastiness, laziness, and stupidity are remarkably contagious.”

Bob Sutton’s conclusion is plain and simple: “You can’t wait very long to see whether team members who don’t live the [company’s core values] will mend their ways. You need to intervene quickly. If pointed and persistent feedback fails, you need to expel the bad apple.”

How do you know if you have a C-Player? Ask yourself this simple question: “Would I enthusiastically re-hire everybody on my leadership team?” Unless your answer is a resounding “Yes!”, you need to take the assessment below.

Brad Smart is his book, “Topgrading” shares a simple tool to help evaluate and topgrade your team with people who take more initiative, work smarter, display more resourcefulness, demonstrate greater teamwork, attract more like minded individuals and generate more profit to help grow a stronger company.   Smart would challenge you to honestly rate every team member starting with your leadership team along two dimensions: alignment with company core values on the “y” axis and productivity on the “x” axis.  In its simplest form this provides an idea of who are your A-players, B -players who might be coachable to become A-players, and C-Players.  Performance can be coached – but it is very difficult to coach alignment with company core values.

Based on these two dimensions you can categorize team members in four buckets: 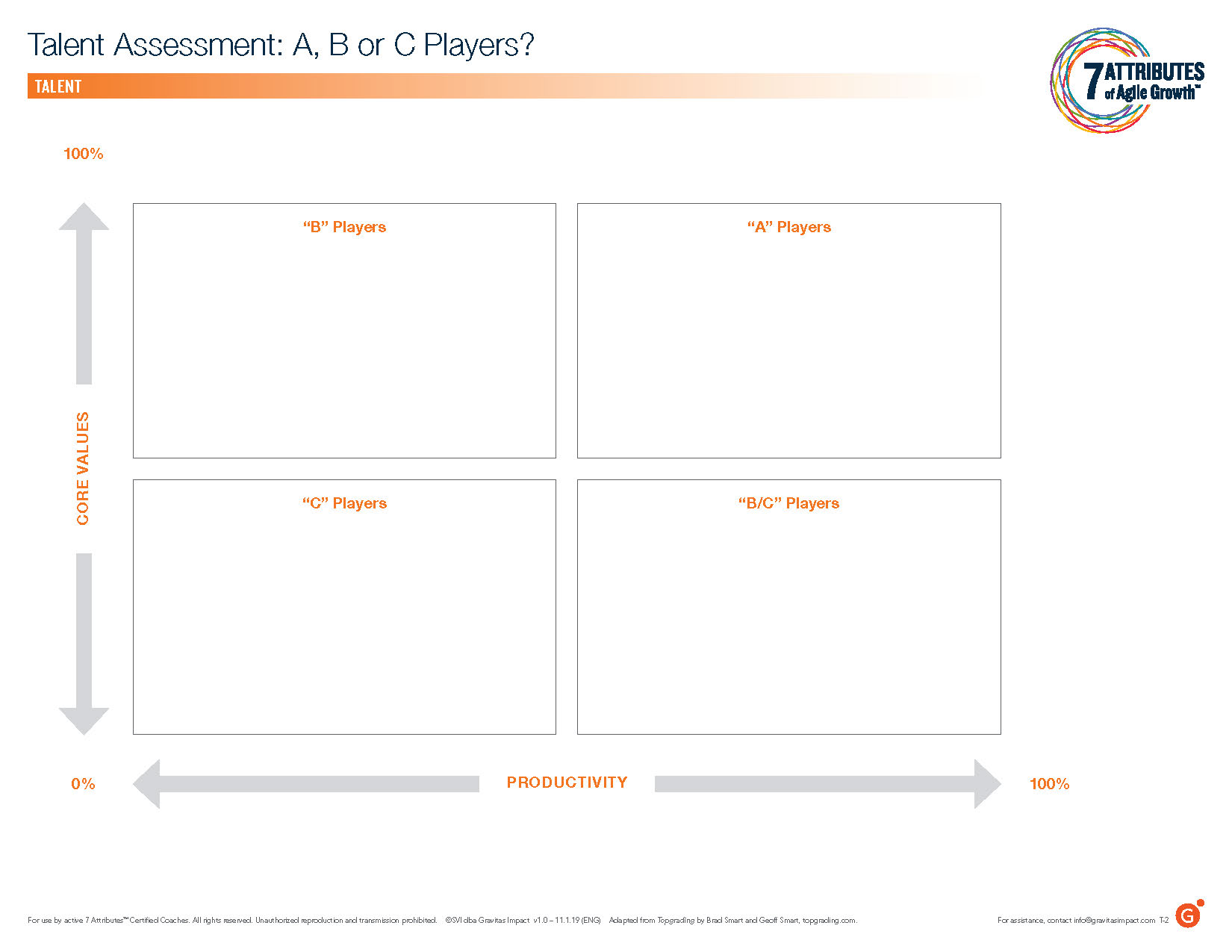 Please note: This tool doesn’t replace a formal review process – but it is a good and simple way to frame a conversation on talent that many CEOs try to avoid.

Sometime after my frustrated A-player left, a new CEO joined the company. He did what I should have done long before: he terminated the C-Player. She was heartbroken and felt humiliated. Then she pulled herself together. Two months later she had found another job, that better fitted her talent and aspirations. In the end everyone was better off: the team was relieved, and she was much happier. Had I terminated her myself we would have ended up in the same place, without losing my A-player.  By freeing the C-Player of the burdens of your employment, you are often affording them bigger opportunities.

After this experience I became faster at providing brutally honest – yet respectful – feedback to C- and B/C-players. Some of them improved, and some of them were let go. Every time I let a C-player go I noticed the same pattern: the rest of the team would breathe a sigh of relief, and the atmosphere among the team members would immediately get better. Sometimes people would even tell me: “Finally! I don’t know why it took you so long!”

It is of crucial importance to have clear, broadly communicated company values: a handful of rules that you live by on a day-to-day basis and that depict how you and your team behave.  Such as: “We handle our client’s money like it was ours”, “We are non-judgmental”, or “We are intellectually curious 24/7”. Repeatedly sharing them and living them yourself clarifies the behaviors you expect – and sends clear signals about which behaviors are not tolerated. When my story happened we had values – neatly hidden in the employee handbook that we never flipped open. I assumed that people knew how to behave because it was “common sense.” Big mistake. Learning from this, I developed a very simple set of clear values in the company I led.  I communicated these core values – and the consequences for breaking them – broadly and transparently. I learnt never to let a C-Player situation fester anymore.

As a business coach, I work with founders of mid-market companies who are frustrated because their business is not growing the way they want; my passion is to help them identify and remove the growth roadblocks they have been hitting so they can grow faster and with less pain. In some cases, a key roadblock is right in front of their nose: they need to replace some of their leaders, even though they may not want to admit it. I would like to learn about your growth roadblocks; contact me to discuss at Xavier@AmbroseGrowth.com.